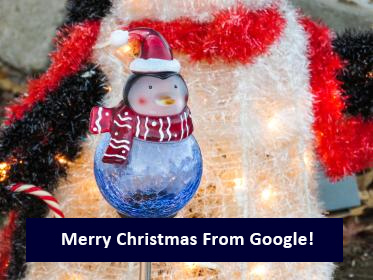 Merry Christmas from Google, we didn’t roll out Penguin 4.0 till after the holidays!!!

The mere mention of the name Penguin in the world of SEO is enough to any webmaster shiver. They probably have a right to be nervous however as previous versions of the Google Penguin update (designed to penalize websites with low quality links) sent search engine rankings plummeting. This put many online companies on life support, or in certain cases, out of business entirely.

With the announcement of Penguin 4.0 now made official, this time in real time, one has to wonder what the effects will be for websites everywhere in 2016.

As long as you didn’t engage in any “naughty” link building methods however your website should be fine right? Hopefully the answer to that question is yes but Google updates are known to be unpredictable.

In the past week many webmasters attest to the fact that Google was indeed doing some live testing with the new Penguin algorithm. We at My Rank SEO also confirm this news after witnessing first hand how much search rankings fluctuated during that time.

“Search engine rankings bounced around like ping pong balls with top websites dropping several pages. Even some websites we believed to be “safe” or search engine friendly were effected.

There is probably no need to push the panic button just yet however. Testing in most cases is just that, a way to gauge certain results after playing around with all the variables. One can assume that most websites won’t feel huge any huge repercussions unless they’ve engaged in any recent “questionable” behavior.

What makes Penguin 4.0 so interesting however is it will be able to detect and respond to bad backlinks quicker than ever before. So if you were unsure about the quality of a certain link (or several) you just acquired you’ll probably get the answer quick.

Rumors continue to circulate that the release date for Penguin 4.0 could take place in March. Other experts are claiming however that the update may be on its way even sooner, maybe even at the start of February.

Either way it is probably a wise idea to take an extra close look at your link profile and clean up any bad links soon. Whether that involves using the disavow tool or manually removing them you don’t want to get caught in Google’s cross-hairs.

Recovery from a Google penalty can be much more time consuming then avoiding the problem entirely. As we know already, the clock it ticking….

marketing & sales
does this work?